While the sports world — and the whole world in fact — is on hold during the COVID-19 pandemic, several Altoona Curve staff members took some time to revisit their favorite memories while working in sports.

Aaron McGuire, Assistant Director of Finance
“I was in high school in 2010 and was enjoying watching the Curve win their way to what would eventually be their first-ever championship season. In mid-August, I witnessed the longest game in franchise history, with the Curve winning 4-3 over New Hampshire after 19 innings, a game that ended just before 1:00 a.m. I remember the Curve having the bases loaded in the bottom of the 12th, with two outs and a full count. When the pitch was thrown, the batter took the pitch. Everyone waited in anticipation — I think even the umpire waited an extra second before calling him out on strikes. So the game continued further into the night. We had a 14th inning stretch. I had purchased tennis balls for ball launch and wasn’t about to let my $10 go to waste, so my family and I were in it for the long haul. Finally, Miles Durham cracked a long ball just over the left center field wall to walk-off in victory in the 19th. The 100-or-so of us that were left in the stands went nuts. I can’t ever imagine a game that will beat this one as my all-time favorite baseball memory!”

Braeden Appleman, Director of Creative Services
“My fondest memory was something unexpected and improvised. I was manning the roving camera and waiting for an on-field game to start when Loco took my camera. He insisted that I lead a clap-along chant with the crowd. I played along and it ended up being my favorite memory working in MiLB. Being able to interact with the crowd and make people laugh put me in a great mood and I realized that I was a part of a fun memory.”

Derek Martin, General Manager
“One that I always laugh about was when we had William “The Fridge” Perry at the Curve around 2003 or 2004.  The limo didn’t show up and, in a scramble, Parney called me into his office to go pick him up.  I said sure and didn’t even think that at the time my car was a Pontiac Sunfire (super small car).  We will just say, “The Fridge” wasn’t happy with me because he struggled to fit in the car.  Then, if that wasn’t bad enough, I set him up at an autograph table and, again not thinking, got a plastic chair that crashed when he sat down. He did not want to see me the rest of the evening.

Another one was Cinco de Mayo and we had Erik Estrada at the ballpark.  The night was awesome and so was he.  After the game, we went to the world famous Hotel Belmar in Altoona because Erik wanted to watch a boxing match.  My wife was very excited to meet him so I introduced them, and she was so excited that she knocked his drink off the table and all over his lap. That ruined the fight he was excited to watch.”

Nate Bowen, Assistant General Manager
“During my first season of Minor League Baseball in 2010 I was an intern with the Princeton Rays.  There were 14 of us that served as interns for the Rays.  On the off chance that we were not working a baseball game at our own stadium, a large group of us would travel around and go to other baseball games in the area.

Our biggest rival was the Bluefield Orioles, who played the Rays for the Mercer cup.  The teams are the closest two geographically located teams in the country.  We happened to be at a game in July when it started pouring down rain and became very windy.  They did not have enough people to safely get the tarp on the field.  We came out of the stands as a group and pulled the tarp together with the Bluefield staff and were able to cover the field and got the rest of the game played.  This was really my first introduction to the family of MiLB and the way that teams are willing to do almost anything to help each other out all throughout the summer.

My favorite memory in Altoona was the 2017 playoff run to the championship.  You could tell from about July on that we had a special team both on and off the field and they were not afraid to aim high.  It felt like that team was just destined to win the championship.

The starts in that playoff run from Mitch Keller were just next level.  He was on as big of a roll as I have ever seen from any minor league pitcher or hitter.  The feeling of accomplishment for both the team and the front office was one like I had not experienced before.”

Jess Knott, Director of Ticketing
“Other than the 2017 championship, my favorite memory was from 2015. Gift Ngope left a pair of pink cleats for my mom who is a breast cancer survivor. I had no idea that he did that until after he was called up to AAA that June. We had a pink out the park game in August that year and my mom was presented the cleats on the field before the game.” 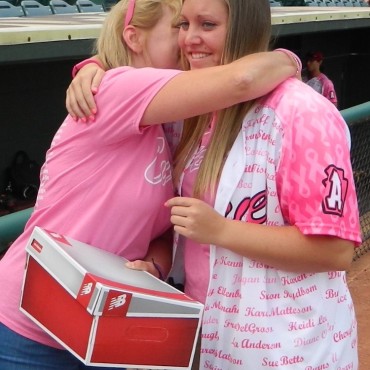 David Lozinak, COO
“My greatest baseball memory was being at Dodger Stadium for Kirk Gibson’s World Series home run off Dennis Eckersley.  I was working in Albuquerque at the time and had flown over to meet Dad for the first two games and couldn’t have gone to a better game!

A few others in the minors really stand out.

One would be of our rehab assignment for Sammy Sosa in West Tenn in 2004.  It was pretty much the only time we sold out games in West Tenn, and in true baseball form, one of those was wiped out by rain.

In Altoona, easily the Curve-Pirates exhibition in 2013.  The thing I remember most is getting five inches of snow three days before the game before getting a gorgeous day and huge crowd on the day of the game before returning to Central PA weather the next day. The 2010 season brought a couple big ones, too. Stephen Strasburg’s debut here had fabulous weather and a great crowd focused on baseball. Later that year, Andy Pettitte made a rehab start for Trenton in the playoffs. What impressed me most was ow genuine he was.

Being in the game for all these years, I can think of many more.”

Jade Giantini, Director of Partnership Services
“My favorite memory in baseball would be the championship in 2017 when I was an intern. I got hired on in a full-time role shortly after that internship ended, which was the cherry on top of the whole experience.”

Mike Kessling, Director of Marketing, Promotions & Special Events
“Two really stand out. First of course, the 2017 championship was not only amazing to win but to be there and to run out with the flag with Loco after the game. The energy in the entire stadium had that night was unmatched. The second would be a playoff game in 2015 when the team came back from being down seven runs to win in the bottom of the ninth.”

Ed Moffett, Senior Ticket Sales Manager
“My first memory would be when I was an intern at Reading and we celebrated the 50th season. To see all of the history and players that have come through that park is incredible. You don’t always have a team around for that long to produce such history. That really made me appreciate what we do in Minor League Baseball and how we bring that back to the community.

My second memory would be in 2017 my first season as a full-time employee with the Altoona Curve, the team went on to win it’s second championship. The experience and excitement around that was amazing. To come to a team and see your team win it all in your first season its awesome. It’s things like that you can’t take for granted.”

Garett Mansfield, Director of Communications & Broadcasting
“One of my favorite moments in Altoona was during my first season here in 2018. One important personal detail before I can explain what happened is that I always call a game with the windows open (and still do despite what happened here). During a morning game against Bowie, I was interviewing a sponsor when Bowie catcher Martin Cervenka hit a foul ball back into our direction. And it flew right into the booth! The ball hit the desk right inside the window where our guest was seated, ricocheted up into a ceiling tile and pinballed off a couple other surfaces and the floor before it peacefully came to rest on top of the desk right next to me. Small particles of the ceiling tile and the dust above it snowed down on all of us. Our sponsor was utterly shocked at what just happened. Defying all odds physics and probability, the ball didn’t hit any of the three people in the booth and missed every computer and piece of radio equipment.”

I’ve been picking pieces of the ceiling tiles out of my hair ever since https://t.co/DMuHuE5pkk

This contribution to the Around the Curve Blog is presented by Microtel. Plan your stay at one of Altoona’s three Lion Country Lodging locations. Click here to make a reservation today.