As we close out the decade, the Altoona Curve enjoyed a 10-year span of rich history both on and off the field. Here is a look back to the best moments from 2010-2019. There is no specific order to this list but for simplicity, we chose five different achievements by the team and individuals on the field in addition to five milestones for the franchise.

Let’s start with the team:

The decade was highlighted by a pair of Eastern League titles, the first in franchise history in 2010 followed by another in 2017. The 2010 squad, led by manager Matt Walbeck, went 82-60 and knocked off Harrisburg in the ELDS. They squared off against Trenton in the championship series and faced Yankees lefty Andy Pettitte in Game 1 on MLB rehab. Trenton won the first game in 10 innings but Altoona rattled off three straight for the title. That championship team had a lights-out pitching staff led by Rudy Owens, Tony Watson and Justin Wilson to go with a lineup that featured Josh Harrison, Jordy Mercer, Chase d’Arnaud and Andrew Lambo.

The 2017 team, managed by Michael Ryan, was also loaded with prospects and finished the regular season 74-66. Mitch Keller pitched two brilliant games in the postseason, including a nine-inning shutout in Bowie during Game 1 of the ELDS. After a sweep of Bowie and wins in the first two contests of the ELCS in Trenton, Keller got the ball again at PNG Field with a chance to clinch the franchise’s second title. Keller hurled 7.1 innings and fanned eight hitters with two runs allowed in the second inning. A bases-loaded walk by Jerrick Suiter and a go-ahead, three-run triple by Jin-De Jhang in the fifth inning put the Curve ahead for good, 4-2. Tate Scioneaux struck out Zack Zehner for the final out of the ninth to seal the clinching victory for the Curve in front of their home crowd.

Team record in the decade 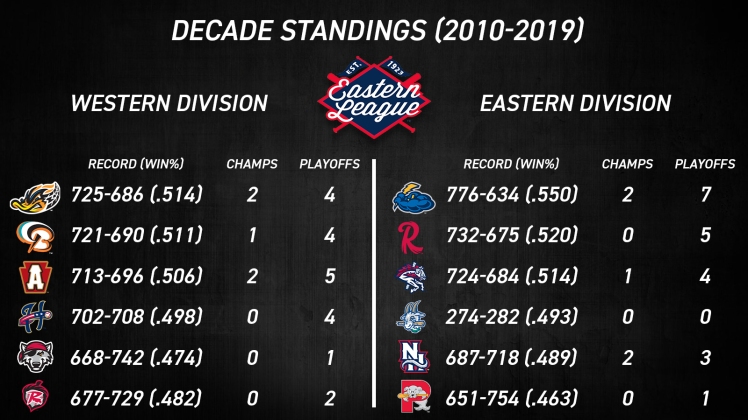 The Curve went to the playoffs five times from 2010-2019 to lead all clubs in the Western Division. Altoona, Akron, New Hampshire and Trenton all won two championships. Altoona ranked sixth in the league in terms of winning percentage over the last 10 seasons but was the third-best organization on the field over the last half of the decade with a .530 winning percentage from 2015-2019, bettered only by Trenton (.577) and Reading (.552).

This is a topic that fans still talk about. A lot. It was an unforgettable day in franchise history. A record crowd of 10,116 fans packed the seats and the lawn seating in left field to watch the Curve host the Pittsburgh Pirates. It was the first of its kind since 2000 and just like the first exhibition game, the Curve won the contest, 8-6. Outfielder Starling Marte impressed with a second-inning grand slam and eventually went 2-for-3. Aside from the game, the Curve made a pair of announcements: an extension of their Player Development Contract with the Pirates through 2018 and that PNG Field would be the host of the 2014 Eastern League All-Star Game.

Another special day on the field brought the best of the Eastern League to Blair County. Looking back on the box score at the close of the decade makes it even more impressive. 25 players that played in the game went on to play Major League Baseball and two of them were MLB All-Stars (Francisco Lindor and Gary Sanchez). The Western Division was victorious, 5-2, thanks to a Steven Moya (Erie) grand slam. A pair of Curve pitchers received decisions in the contest: Ryan Beckman got the win and Kenn Kasparek picked up the save.

Now, let’s look at what the front office is proud of:

Fresh off the first league championship in team history, the team’s original black, green and maroon color scheme was retired with a new combination taking its place starting in 2011. A new logo set was created, introducing a new primary logo to go with the Engineer, Keystone A and Rail C secondary marks with Railroad Red, Boiler Bronze and Soot Black color combos.

More changes came after the team’s second championship in 2017. The Curve installed a new playing surface in the fall and just weeks before the open of the club’s 20th season, a new videoboard was constructed to bring fan engagement and entertainment to a new level.

The franchise was awarded a Golden Bobblehead in the “Best Charity Promotion or Event” category for “Blue Out Saturdays”. The community effort was aimed at raising awareness and funds for Prevent Child Abuse, Pennsylvania. The team wore blue jerseys for every Saturday home game and also sold special Blue Out T-shirts and wristbands. 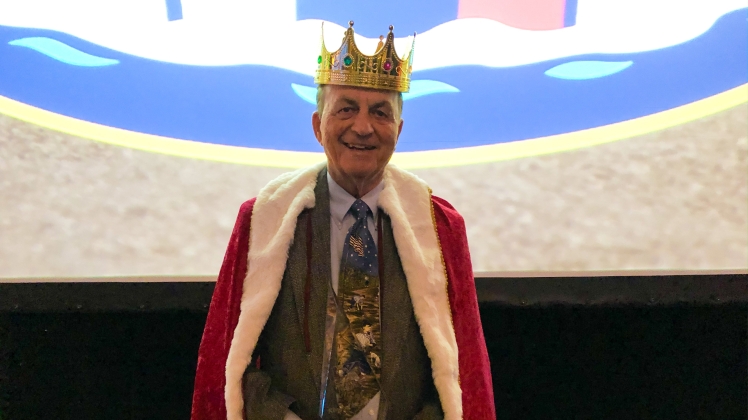 Curve owner and founder Bob Lozinak received Minor League Baseball’s highest individual honor at the 2019 Winter Meetings when he was crowned the King of Baseball. A long-standing tradition awarded to a veteran of professional baseball for longtime dedication and service, Lozinak received his award in San Diego on December 8, 2019. He was part of the group that brought professional baseball to Altoona and owned the club from 1999-2001 and purchased the team back from Chuck Greenberg after the 2008 season.

Multiple PDCs with the Pirates

The Curve and Pittsburgh Pirates have enjoyed a marriage of 21 seasons so far, the longest affiliation without interruption between the Pirates and a minor league franchise. Prior to their exhibition game in 2013, the announcement of a four-year extension to the Player Development Contract between the two organizations was announced. The PDC was extended four more seasons through 2022 in March 2018 during a ceremony in Bradenton to honor the 2017 Eastern League Championship won by the Curve.

The Phenom. Before he pitched the Washington Nationals to a World Series title at the close of the decade, Stephen Strasburg’s professional career started on April 11, 2010 with the Harrisburg Senators against the Curve at Blair County Ballpark. He struck out eight batters and allowed four runs (one earned) over five innings in front of 7,887 fans, the largest April crowd in franchise history. His outing had ups-and-downs while he also hit a double at the plate. ESPNews aired Strasburg’s half innings live on their network.

The longest game in franchise history ended in the most dramatic of ways. On a Friday night at Blair County Ballpark, the Curve and New Hampshire Fisher Cats were tied, 3-3, after five innings and the score held until Miles Durham homered with one out in the bottom of the 19th.

The only player to hit for the cycle in franchise history was Andrew Lambo and he remains the lone player to accomplish baseball’s rarest feat. In a 14-6 win for the Curve in Akron, the outfielder went 4-for-6 at the plate and completed the “natural cycle” in his first four at bats.. He singled in the first, doubled in the third, tripled in the fourth and homered to lead off the fifth.

Just days after the Curve hosted the Eastern League All-Star Game, Adrian Sampson turned in one of the franchise’s greatest pitching performances. The right-hander threw 8.1 hitless innings against the Bowie Baysox and had to deal with just two baserunners (a first-inning fielding error and a seventh-inning walk). However, Mike Yastrzemski flicked a doubled down the left field line to end the no-hit bid. Sampson retired his final two batters to finish the complete-game, one-hitter and still stands as the closest individual no-hitter in club history. Sampson stood as the closest attempt in PNG Field history until Erie’s Casey Mize pitched a no-hitter against the Curve on April 29, 2019 for the first individual, nine-inning no-hitter in Altoona’s ballpark.

Indiana, Pa. native Michael Ryan managed the Curve for three seasons, including the 2017 championship. The Curve won back-to-back Western Division titles in 2017 and 2018, the first time the team had accomplished that feat. The club was unable to reach the playoffs again in 2019 but Altoona’s skipper still surpassed Dale Sveum and Tim Leiper’s benchmark of 213 managerial wins on August 18, 2019 with a win over Bowie. Ryan ultimately racked up a 221-197 record as Curve manager and his .529 winning percentage finished third-highest in club history.