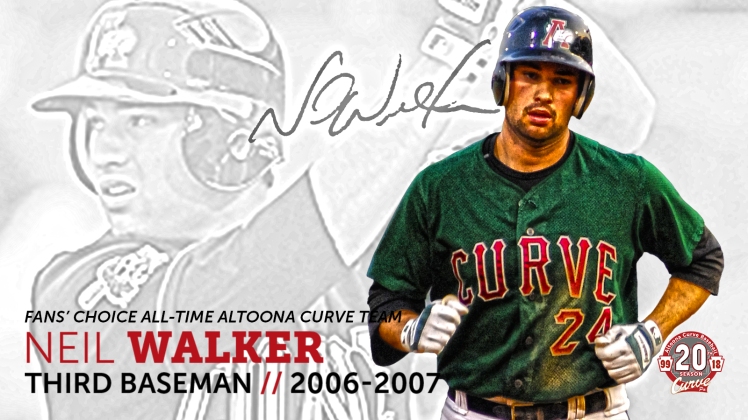 CURVE, Pa. – Late in the 2006 season, the Altoona Curve received two of the most highly touted prospects the franchise had seen.

A pair of first-round draft picks were rated as the Pirates’ top two prospects, with 19-year-old outfielder Andrew McCutchen ranked second and 20-year-old catcher Neil Walker ranked first. They were promoted to Altoona from Lynchburg on the same day and made their Double-A debuts together on August 15, 2006 at Connecticut.

Walker’s performance with the Curve and in the big leagues down the road earned him the selection as the Fans’ Choice All-Time Curve Team Third Baseman.

He homered in his first game with the Curve. He made his home debut on August 19, 2006 at Blair County Ballpark and hit an opposite-field homer in his first at-bat.

Walker played 131 total games with the Curve in his career, originally from 2006-07 and again on a rehab assignment in 2013.

“It was fun to play there,” Walker said to the Altoona Mirror when he returned to Altoona in 2013. “When I was there, I had friends at Penn State, and a lot of times in minor league baseball, you kind of feel like you’re in the middle of nowhere, but that was the most comfortable I felt as far as playing at a home stadium in my minor league career.”

After growing up in the Pittsburgh area and being drafted out of high school by the Pirates, Walker came to Altoona with a little extra fanfare.

“I really enjoyed my time as far as living there and having that be my home field,” Walker said. “It was a little more special to me because of how close it is to my home in Pittsburgh. But it was one of my more favorite stops along the road to the big leagues.”

Walker played in 10 games with the Curve late in the 2006 season, missing about a week on the disabled list with a viral infection.

He returned to the Curve for the 2007 season with a new position. Walker made the move from catcher to third base over the offseason, and he led the Curve with 124 hits, 77 runs scored, 30 doubles and 53 walks on the year, earning a spot in the Eastern League All-Star Game.

Walker earned a promotion to Triple-A Indianapolis for the final 19 games of the season.

He made his major league debut with the Pirates on September 1, 2009 and saw action in 17 games that fall before becoming the Pirates everyday second baseman in 2010. He went on to play seven seasons with the Pirates and earned a Silver Slugger Award in 2014. 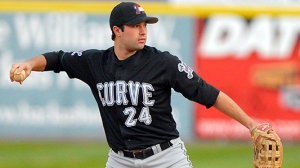 In 2013, Walker landed on the disabled list after injuring his right index finger sliding into second base on April 27. He spent four games with the Curve from May 9-12 on a rehab assignment and hit .417.

The Pirates traded Walker to the New York Mets in December 2015, ending his run with his hometown organization.

Now with the New York Yankees, Walker is playing his tenth season in the big leagues.

Overall with the Curve, Walker played in 131 games over parts of three seasons, batting .283 with 15 homers and 70 RBIs.

“it’s a great ballpark to play in,” Walker said of Altoona. “The fans were fantastic.”

The Curve will give away the Neil Walker Fans’ Choice All-Time Curve Team bobblehead, presented by UniFirst, to the first 1,000 fans at Peoples Natural Gas Field on Saturday, August 25.