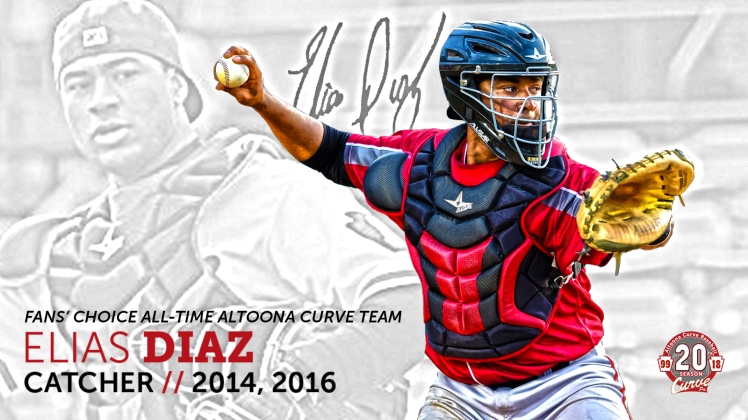 The 2014 Altoona Curve season saw the team post its worst record in franchise history. A tough year with tough weather, fans were kept entertained by some standout individual performances.

The best player on that team was catcher Elias Diaz. He entered the season ranked as the Pirates’ No. 11 prospect, and he cemented that status with a solid year.

He led the Curve with a .328 batting average, the best by a catcher in team history, while adding six homers and 54 RBIs.

Noted for his defensive work, Diaz threw out 33 percent of base stealing attempts against him. After the season, he was ranked as the No. 10 overall prospect in the Eastern League by Baseball America and the circuit’s “Best Defensive Catcher.”

His on-field performance led him to winning the team’s Most Valuable Player award. He was also selected as an Eastern League Mid-Season All-Star, playing the All-Star Classic hosted by the Curve at Peoples Natural Gas Field, and the league selected him as a Post-Season All-Star. 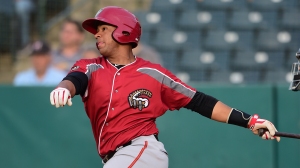 Curve fans saw his offensive skills on display from the start. In his Double-A debut to open the season, Diaz went 3-for-3. He picked up seven hits in his first four games. He was batting .474 through the season’s first 11 games.

Diaz stayed hot at the plate as the summer months warmed up. In June, he batted .351 and added a pair of homers.

Beginning on July 22, Diaz went on a 16-game hitting streak, during which he hit .450 with seven doubles, a homer and 17 RBIs. That performance helped earn him a promotion to Triple-A Indianapolis on August 15.

Diaz joined the Pirates for his MLB debut on September 12, 2015 and saw action in just three combined games over the 2015 and 2016 seasons.

Diaz started seeing more major league time in 2017, and this year he has put together a solid season with the Pirates. Through 58 games, Diaz is hitting .282 with seven homers.

Diaz returned to the Altoona roster on a major league rehab assignment in July 2016, playing in two games. He picked up hits in both of those games, which extended his Curve hitting streak to 18 games. Should he ever find himself in a Curve uniform again, the streak dating back to 2014 is still alive.

In total, Diaz has played 93 games with the Curve across two seasons. He has combined to hit .327 with six homers and 84 RBIs.