Those marks were all set by Adam Hyzdu between 1999 and 2000. Those marks are still franchise records.

He was the first star player for a brand-new franchise at the turn of the millennium, and his impact still resonates among Curve fans in a way no other player can claim. That kind of recognition is rare in the minor leagues, especially carrying over two decades.

“It’s unique,” Hyzdu said. “The people who were on the first team in Altoona, I think most people would identify with that. The original guys that started the franchise in Altoona.”

Cory Giger, who has covered the Curve for the Altoona Mirror since 1999, said to have a player so closely associated with a minor league team the way Hyzdu is with the Curve is a remarkable phenomenon.

“Adam was a sensational baseball player for two years in Altoona,” Giger said. “But that really only touches the surface of the story for him. Because it was the first two years, because he was the all-American boy, because he was great on the field and off the field, he became the face, not only of a minor league franchise, but a brand new minor league franchise in a town where the fans were so hungry to have a new team and to learn about minor league baseball.

“He wound up being the perfect ambassador for what minor league baseball is both on and off the field.”

Rob Egan, the team’s play-by-play broadcaster from 1999-2004 and general manager from 2009-2016, said Hyzdu was exactly what the team needed when he was added to the roster early in the inaugural 1999 season.

“The team was struggling to find its way, to find its identity,” Egan said. “It was being embraced by the community, but it didn’t have the identity and that player that really elevated the hopes and the expectations that made it a better team. When he came to us, the team almost immediately took off.

“He wasn’t the type that was a ‘rah-rah’ leader, but he was the type who showed up every day, gave you his honest effort, was a true professional and certainly had talent. He had power, he could hit for average and he came through in the clutch a lot. That was something that always rang true for Curve fans.”

After breaking a list of records previously held by Ken Griffey, Jr. at Moeller High School in Cincinnati, the San Francisco Giants drafted Hyzdu in the first round (15th overall) in 1990. Over the span of nearly a decade, Hyzdu bounced around the minor leagues before signing with the Pirates in May 1999.

At 27 years old and playing with his fifth major league organization, Hyzdu found his own baseball identity in a transformation.

“I was at a point in my career where I was crossing over from prospect to a more veteran guy who was good in the clubhouse,” Hyzdu said. “That was kind of weird transition. I hadn’t viewed myself as that. I was 27 when I came over, and it didn’t dawn on me that I was an old guy.” 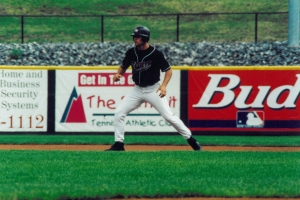 “It always helps when you do well,” Hyzdu said. “It’s one thing to have a great presence in the clubhouse, but if you can’t get a hit for a month, you lose some of that credibility.”

It was widely expected that Hyzdu would be heading to Triple-A Nashville the next year, but just before the start of the 2000 season, he was sent back to the Curve.

“It instantly created more interest in that second year, that he was coming back to us,” Egan said. “He was a known quantity, he was a leader and he was essential to the identity of the team’s inaugural season.”

The young franchise had its face back for another year, a rarity in the minors.

“In the minor leagues, it’s almost a complete turnaround in A-ball or Double-A,” Hyzdu said. “For one guy to stick around a couple years, it’s nice (as a fan) when you’re getting ready for the next season. That helped solidify our relationship with each other.”

In his return, Hyzdu went on to bat .290 with 31 homers and 106 RBIs while playing in all 142 games, repeatedly coming though with clutch hits and key defensive plays. His performance earned him the Eastern League Most Valuable Player Award, and he is still the only Curve player ever selected for that honor.

“I think any time you’re the league MVP, it’s kind of a big deal,” Hyzdu said. “You may kind of downplay it because it’s not the big leagues, but having children and understanding how difficult it actually is to get to Double-A, or to even play college baseball and how few kids get the opportunity, you get a chance to reflect back and say, ‘You know what? That was kind of cool.’

“Those were some pretty good years, and it’s quite an honor to be named a league MVP.”

Along the way, he cemented his status as a fan favorite, taking time to sign autographs and interact with fans, while handling interviews with media in good times and bad.

“To come through with clutch hit after clutch hit, ninth-inning home runs, pinch-hit homers to win games, the bottom line is he was a sensational player on the field,” Giger said. “You don’t become a legend anywhere unless you are first and foremost a great player.

“But because he was a great player who also accepted his role of being the leader, of being the older, mature guy on the team and of being the face of the franchise, that’s really what stood out to me. He accepted and appreciated what he could do for Altoona and the Curve.”

The 2000 season ended in heartbreak for the Curve, with the team narrowly missing out on the postseason after a hard-fought battle with the Akron Aeros. But following the season finale, the Curve shockingly announced they would retire Hyzdu’s number 16 during an emotional post-game ceremony.

“I was so floored at the presentation that the Lozinaks, (then-general manager) Jeff Parker and everybody put on,” Hyzdu said. “I didn’t know what to do. It made me tear up and get chills thinking, ‘Are you kidding me? This is for me?’ It was such an honor. And it’s still an honor.

“Where else does that happen, to be honored in such a way? I humbly cherish that.”

It was a decision that might have been difficult to understand for those outside of the team and fanbase. But the Curve family, made up of the players, staff, fans and everyone along for the first seasons, considered the retiring the number a fitting honor.

“Unless you were there, you wouldn’t understand,” Egan said. “I think it made perfect sense for the franchise, for the fans and for the team. I remember postgame giving that honor to Adam, and as disappointed as the team was, the team came out and watched the ceremony, and that was something special. … I kind of get chills even thinking about it.”

The decision stands up with passed time, with his name still filling the Curve record book today. But the recognition goes deeper than on-field performance.

“You had to be in Altoona in 1999 and 2000 to fully understand and appreciate why the Curve retiring his number was absolutely the right move,” Giger said. “There were snickers around the Eastern League. And I get that. On the surface, it seems strange if you were not familiar with what he meant for the city. 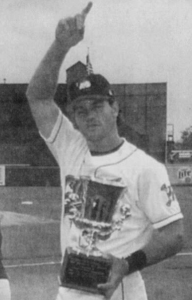 “If you just look at the numbers, you would say, ‘Wow, that guy’s a good player.’ But you had to be in Altoona and see the constant newspaper coverage, TV coverage, people talking about him at the ballpark, people clamoring for him to finally get his opportunity in the major leagues. Because he meant so much to so many people as a person and as an ambassador, not just as a player, I have always felt that the Curve absolutely made the right call in retiring his number.”

With an outpouring of support from the Altoona community, Hyzdu finally received his first call to the big leagues a few days after the Curve season ended. He made his debut with the Pirates at the age of 28 on September 8, 2000, batting .389 with a homer and four RBIs in 12 big league games that fall.

Hyzdu went on to spend parts of four total seasons with the Pirates, putting together some memorable stretches along the way. He won a World Series ring with the Red Sox in 2004 and closed out his seven-year MLB career playing with the Padres and Rangers.

Nearly two decades removed from his time with the Curve, Hyzdu remains the franchise’s most popular player. Last fall, he was voted alongside Andrew McCutchen and Starling Marte as an outfield honoree on the Fans’ Choice All-Time Curve Team as part of the team’s celebration of 20 years of baseball in Altoona.

In reflecting on his playing career, Hyzdu cherishes the relationships he built over time.

“I learned to struggle, that’s for sure. But hopefully I came out better on the other side.”

Adam Hyzdu will return to Peoples Natural Gas Field this Saturday as the team gives out the Adam Hyzdu Fans’ Choice All-Time Curve Team bobblehead to the first 1,000 fans, presented by US Foods. For tickets, click here, call 877.99.CURVE or stop by the PNG Field box office.