BRADENTON, Fla. — The bullpen was familiar. The ballpark was familiar. He had warmed up there 16 times before. But for top Pirates pitching prospect Mitch Keller, the stage was a little bigger at LECOM Park last Sunday.

Making his first appearance in a major league spring training game with a crowd of over 7.000 in attendance and many more watching along on television, Keller knew it was a chance for him to prove what he can do on a mound.

“It’s a lot different than High-A ball, when you have a couple hundred people in the stands compared to seven or eight thousand peoples,” Keller said. “In your mind, you know it was a Major League game with the big league players, big league manager and pitching coach watching you.” 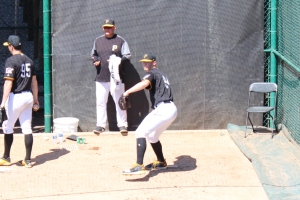 In the big picture, the first Grapefruit League outing for Keller is not a huge deal. In fact, if he had bombed or struggled, no one would probably think much of it.

But it is another milestone landmark on his journey to the big leagues. And, as it played out, he put together a great outing, likely picking up a few passengers on his hype train.

There was a bit of a buzz in the crowd about Keller before he took the mound. Fans are more informed about minor league prospects than ever before, and they knew they were seeing one of Pittsburgh’s latest potential rising star arms.

“Eyes are on me,” Keller said. “Expectations are high for me. I felt the little bit of butterflies and the adrenaline.”

Keller entered in the seventh inning of the Pirates’ match-up against the Red Sox and tossed two scoreless innings, allowing one hit with no walks and striking out three.

Keller is not used to working as a reliever. He has made just one relief appearance in his professional career.

He started to loosen up in the bullpen during the sixth inning with catcher Jackson Williams, who also caught his Double-A debut with Altoona in Trenton last August.

After Keller finished his warm-up tosses, Williams called him over, gave him an encouraging pat on the chest and offered some words that helped calm his nerves.

“He told me my stuff looked good in the bullpen and to go out there with all the confidence in the world,” Keller said. “He said, ‘I know you’re nervous, but just take that and use it.'”

Williams, who saw major league time with the Giants and Rockies before playing 25 games with Altoona last season, said Keller did not show the nerves he admitted to having.

“He’s pretty cool, calm and collected,” Williams said. “He doesn’t get too emotional about anything. He was ready to go. He’s a kid that doesn’t get phased by too much. If anything, you might want to try and get him a little more excited about things. From the outside looking in, he doesn’t really look like he gets too fired up for anything.”

At the start of the seventh inning, the gate opened and Keller made the jog from the right field bullpen to that familiar LECOM Park mound to face Boston’s Rusney Castillo. He quickly sat him down on strikes.

“That run from the bullpen was pretty cool,” Keller said. “Once the first strike went over, I pretty much calmed down. Once I got the first guy out, the butterflies were pretty much out and it was back to pitching like normal.”

Keller worked a fly out and then struck out Ivan De Jesus looking to close a 1-2-3 frame. He returned for the eighth, working two flyouts, then allowed a double to Cole Sturgeon before striking out Luke Tendler to close out his afternoon.

“Even with the butterflies, I was very focused,” Keller said. “You notice them, but it didn’t feel any different. It’s still the same game, just heightened a little bit.”

Keller made six regular-season starts with the Curve last season after an August call-up from A-Adv. Bradenton, going 2-2 with a 3.12 ERA. He was even better in the playoffs, tossing a complete-game, one-hit shutout at Bowie during the Western Division Series on September 7 and allowed two runs over 7.1 innings  in Game 3 of the Eastern League Championship Series against Trenton on September 14 as the Altoona clinched the league title. He was named the Eastern League’s Postseason Most Valuable Player.

For 2018, Keller will likely start the season in the rotation with the Curve. He is ranked as the top prospect in the Pirates’ system by MLBPipeline and Baseball America. MLBPipeline also tabbed Keller as the fifth-best right-handed pitching prospect in all of baseball.

The Curve begin their 20th season, presented by Stuckey Subaru, on April 5 at Peoples Natural Gas Field against the Akron RubberDucks. Tickets are now on sale at AltoonaCurve.com, by phone at 877.99.CURVE or in person at the PNG Field box office.