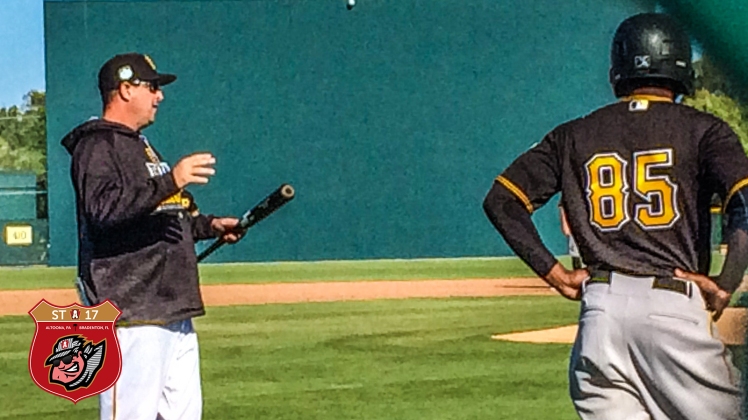 BRADENTON, Fla. — Day four of trip to Spring Training sure was a busy one.

Curve broadcaster Trey Wilson back with you catching you up on our activities in the Sunshine State on Tuesday.

We spent the morning over at the training complex at Pirate City for the first day of minor league camp.

New Curve manager Michael Ryan is getting ready to head to town in just a few weeks, but he will spend the rest of March working with players to get ready for 2017.

Good morning from Pirate City where we are getting a look at our new skipper in action pic.twitter.com/4Di0Wn1LoF

“It was exciting to see all the guys, the way they showed up in shape,” Ryan said.

Speaking of in shape, we ran into Curve first baseman Edwin Espinal (2016). He said he’s dropped nearly 20 pounds this offseason.

Chris Diaz and Anderson Feliz getting some swings in at Pirate City while Edwin Espinal looks on pic.twitter.com/eU08KmKcs9

If you have not heard, Ryan is a native of Indiana, Pa., just a short drive down the road from Altoona. This year will be a bit of a homecoming for him.

“It’s a huge honor,” Ryan said. “Indiana is about 35 minutes away if you’re driving pretty fast down 22. I have family in Pittsburgh and Indiana and a lot of people from the Johnstown area that I am close with. They’ll be showing up and supporting.

“I’m very excited to be close to home. I want to see them coming out each night and we are going to try to put a good team on the field to where they’ll want to come out.”

Miguel Perez, who played for the Curve and then coached with the team in 2015. This year, he will be joining the West Virginia coaching staff.

On Tuesday, he was out on the field chatting with some of the young catchers.

After watching some PFPs, pitchers throwing live batting practice and guys hitting off the pitching machine, we ventured out to see with some guys that have stepped away from Pirates’ camp for a few weeks. 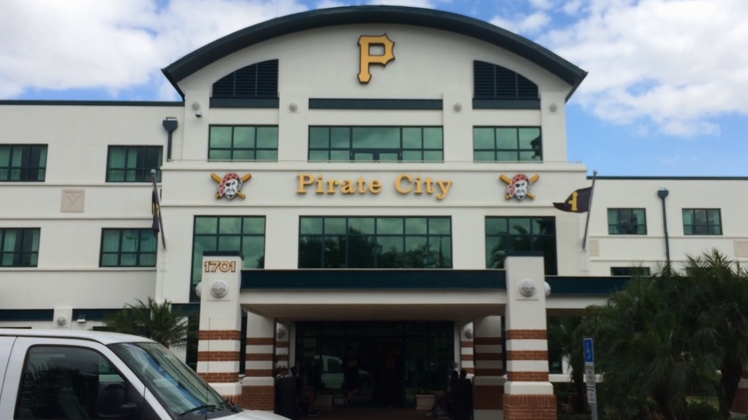 After leaving Pirate City, I made a quick trip about 20 minutes down the road to catch the Dominican Republic World Baseball Classic team in action against the Orioles in Sarasota.

An All-@AltoonaCurve alum outfield today for the Dominican Republic in Sarasota pic.twitter.com/92sALkEnPD

The Dominican Republic roster is absolutely stacked with some of the biggest names in baseball, including Robinson Cano, Manny Macado, Jose Reyes and many, many more.

I just caught a couple innings in Sarasota before hopping back in the car and riding a few miles back up north to catch the back half of the Pirates’ afternoon contest against the Braves. Baltimore eventually picked up a 5-4, walk-off win.

Curve shortstop Kevin Newman (2016) made the highlight reel with this impressive catch.

We caught up with Newman, who has been a part of big league camp this spring with the Pirates. The first-round pick from 2015 played 61 games with Altoona last year.

“The spring has been going really well,” Newman said. “I am happy to be here. It’s really cool to see all of these people, how professional they are and how they work.”

The other half of last year’s double play combo, second baseman Erich Weiss, is also with the major league club this spring and has been stringing together some hits over the last few days.

“I struggled a little bit to start, but it’s just kind of a learning curve,” Weiss said. “But you can’t think about your swing or try to hit it a million feet, you have to stay within yourself and think about competing against the pitcher before you get in there.”

“It’s an awesome experience, being here. To be around these guys, all the coaches and the veterans, it’s really good to learn from them, trying to take as much information as you can from those guys.”

One of those guys he has leaned on is Pirates’ second baseman Josh Harrison (2010).

“It’s been good to learn from J-Hay and all those other guys that are there,” Weiss said. “I’ve learned from them how I can better my game at second.”

Weiss has only played second base over his first three full professional seasons, but he has been getting work all over the infield this spring, including third base, the position he played at the University of Texas.

“I’ve always enjoyed playing third,” Weiss said.”It’s pretty difficult, because you have to read the hops pretty fast and you have to react faster. But getting those reps at third this spring has helped me a lot.”

Wednesday is our last full day in town, and we will have plenty more to tell you about. Stay tuned!

One thought on “Curve at Spring Training: Day Four”