CURVE, Pa. – Reese McGuire has been a catcher since his Little League days in Covington, Wash. He’s only 21 years old, has reached the Double-A level in only four years of professional baseball and is considered the Pirates’ catcher of the future by many.

“In my opinion, he’s going to be a complete catcher,” Curve manager Joey Cora said about his young backstop recently.

Being one of the youngest catchers in the Eastern League only whets the appetite of McGuire, the Pirates’ No. 1 selection (14th overall) in the 2013 MLB draft.

“I’m so happy with my progression,” McGuire said. “I feel I‘m the best I’ve ever been. I’m learning and growing as a player every day.”

From the Gulf Coast League to short-season Jamestown, from low A West Virginia to advanced-A Bradenton and now to Altoona, McGuire has made solid strides up the pro ladder and is only a phone call away from the big leagues.

“Reese has done very well, especially defensively,” Cora said. “His offense was a little slow at first, but what has impressed me most about him is that he can separate the two. If he goes 0-for-4 at the plate, it doesn’t affect his defense.”

It never has, noted McGuire, who became a catcher at age 10 “because my brother was the dominant pitcher in the league.”

“I just fell in love with the position,” McGuire said. “My dad was a catcher, too, and my grandfather was a catcher at Duke University and a teammate of Dick Groat.”

Success came early for McGuire, now a 5-11, 195-pounder. As a high schooler, he was the Gatorade Washington Player of the Year. He also won the Dick Case Player of the Year award after helping Team USA 18 and under beat Canada for the gold medal in the IBAF 18U World Championship in Seoul, South Korea.

“I grew up so much that year,” McGuire said. “I was only 18, away from home, doing laundry and paying bills. What an experience. I’m truly blessed with all the support I’ve had from my parents and friends.”

After attending a lot of summer showcases, he committed to the University of San Diego and his senior year in high school became a whirlwind of activity with scouts and agents visiting his home frequently. 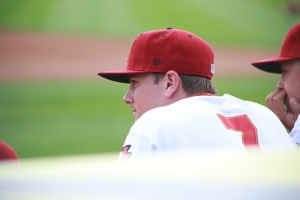 “It was a fun experience and I figured it was win, win either way,” he said. “Either go to a great college or do what I’m doing now. I felt like I was ready for pro ball and being a No. 1 helped me to sign.”

Coming into 2016, McGuire’s minor league stats included a .271 batting average and 100 RBIs in 246 games. After a solid season at Bradenton, he went to the Arizona Fall League and then was invited to big-league camp this past spring.

“Big-league camp was an awesome experience,” he said, “and I had a great month and a half in Arizona playing against the top (minor league) guys in the game. I just built more confidence for here.”

The key to being a good catcher?

“Having the all-round package,” McGuire said. “Having the trust and confidence of the pitching staff and building relationships.

“Being a competitor, you want to succeed on both sides,” he said, “but you’ve got to separate offense from defense. I take pride in my defense and calling games. You’ve got to know who is on the bump and have ways to motivate them. Everyone is different and you’ve got to learn their personalities as well as their pitches.”

Cora said there is a lot more to catching than just giving signs.

“You’ve got to learn your staff and the opposing hitters,” Cora said. “It takes a lot to be a catcher at this level and, obviously, higher levels.

“All organizations want their catchers to become good defensively before working on the offense,” the manager said. “His offense will come because he has a good foundation. He knows what he needs to do and he’s willing to do it.”

McGuire is having a fun season and a lot of the reason is the Curve’s success.

“The season is flying by because we’re having so much fun,” he said. “When you’re on a team like this it’s fun to come to the ballpark every day.”