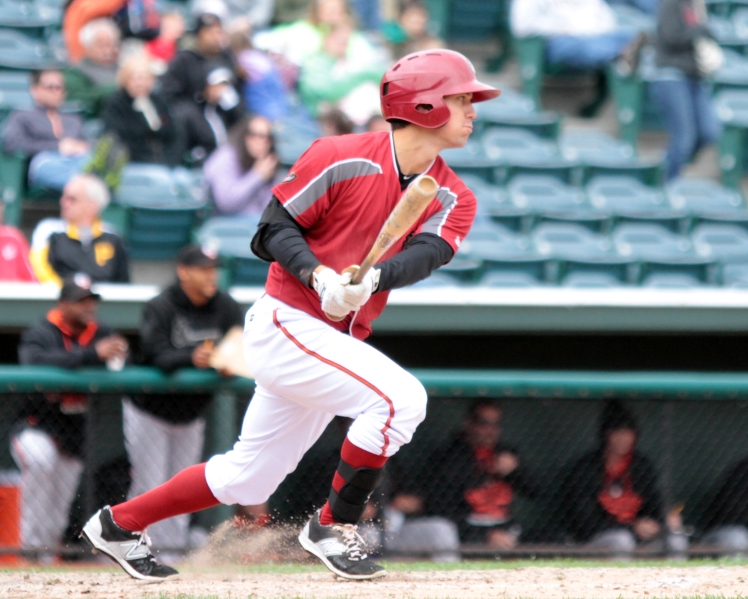 CURVE, Pa.—With the likes of Max Moroff, Josh Bell, Dan Gamache and Adam Frazier smacking line drives all over the field, Altoona has had one of the Eastern League’s top hitting teams all season.

All have had their moments in helping the Curve be a player in the Western Division playoff race.

None has been more impressive than Frazier. As of July 25, Frazier’s .361 batting average was tops in the Eastern League, although he didn’t have enough plate appearances at the time to qualify for the batting crown.

“I broke a finger in spring training and rehabbed the first month of the season in Florida,” Frazier said of his late arrival in Altoona.

However, since donning a Curve uniform, Frazier has been nothing short of sensational, especially in the leadoff spot. From early June to early July, Frazier batted .442, tops in all of pro ball at the time.

“He has a simple approach at the plate,” said Curve manager Tom Prince, who also mentored Frazier last year in Bradenton. “He stays inside the baseball and doesn’t overpower it. He’s not looking for home runs. He’s short and quick to the ball and hits it on the line or sharp grounder almost every time.”

The 5-foot-10, 170-pound Frazier was an All-America shortstop at Mississippi State, helping MSU to its first-ever appearance in the College World Series championship round against UCLA in 2013. He batted .352 as a junior and led all of college baseball with 107 hits in 71 games.

“It was best-of-three and we lost the first two (to UCLA),” Frazier said recently at Peoples Natural Gas Field recently. “We had a pretty good run but ran out of magic. Omaha was a great experience, though.

“I wouldn’t trade my time at Mississippi State for anything. It was awesome.”

A sixth round pick by the Pirates in the 2013 draft, Frazier signed and went to short-season Jamestown “about a week after Omaha,” he said. He batted .321 in 58 games in the New York-Penn League – 43 at shortstop and 15 at second base–and was named to the mid-season NYPL all-star team.

Frazier skipped low-A West Virginia and played the entire 2014 season at advanced-A Bradenton.  He batted .252 in 121 games but helped the Marauders win the second half of the Florida State League and qualify for the post-season playoffs where they lost in the first round.

“It was difficult but a good learning experience,” he said of Bradenton. “It was hot every day and I had to learn to take care of my body and get ready to play a full season successfully.”

Frazier called the broken finger, which kept him in Florida the first month of the 2015 season, “a blessing in disguise.”

“I was able to get my body strong and I missed the cold weather here,” the Georgia native said, laughing. “Everybody was playing well when I got here so I had to wait my time.”

Frazier was used in center field a few games – “my first time in the outfield,” he said—until Gift Ngoepe was promoted to Class AAA Indianapolis and that put Frazier back in the middle of the infield with Moroff.

Frazier was one of five Curve players picked for the E.L. All-Star Game in Portland, Maine.

“It was a great experience playing with and meeting the best players in the league,” he said. “And, it was great seeing Dan Gamache win the home run derby.”

As a schoolboy in Watkinsville, GA, Frazier was an outstanding basketball player, and scored a school-record 29 points as a freshman.

“I played on the varsity as a freshman,” he said, “but I only played three years because I knew my future was in baseball. I gained strength during my year off and that helped me go to a big-time program (Mississippi State).

“I enjoyed basketball a lot,” he said, “and college basketball would have been fun but the NBA isn’t looking for 5-10 guys.”

Besides his time at Mississippi State, Frazier also played for the USA National Team, and he loved that experience.

“We played in Cuba and the Netherlands and also played teams from Japan and Taiwan,” he said. “Trevor Bauer (Indians), Kris Bryant (Cubs) and Michael Conforto (Mets) were on the team.

“It was an awesome experience to represent our country.”